Rarely are voices of consternation raised worldwide as happened yesterday with the death of basketball legend Kobe Bryant in a helicopter crash in California, in which his daughter and seven other people also died.

A team of 18 people today investigates the causes of the accident in which the five-year-old 41-year-old NBA champion, his daughter Gianna, 13, the other six passengers and the pilot who were travelling in a Sikorsky S-76 helicopter that fell to Land on Sunday in the hills near Calabasas, in southern California.

Daryl Osby, Los Angeles County fire chief, reported that the office received an emergency call reporting the accident and that upon arriving at the scene of the incident, paramedics found that there were no survivors.

Bryant was travelling in his private helicopter, which departed from Orange County, where he lived, about 9 am. Fifty minutes later the helicopter rushed to the ground and burst into flames.

Los Angeles police (LAPD) said the lack of visibility was such that their own helicopters were left ashore Sunday until noon, when the sky cleared.

“The weather situation did not meet our minimum standards for flying,” said LAPD spokesman Josh Rubenstein. “The fog was enough that we weren’t flying . “He added that the minimum standard of flight of the Los Angeles Police Department is two miles (3.2 kilometers) of visibility and a cloud ceiling of 800 feet (244 meters). However, in the helicopter in which Kobe Bryant was travelling, it was decided to fly .

Some fans moved to the scene of the accident, causing traffic jams that delayed the arrival of some investigators, so the police asked people to stay away.

“In logistic terms it is a nightmare because the accident site itself is not easily accessible,” Los Angeles County Sheriff Alex Villanueva told reporters. 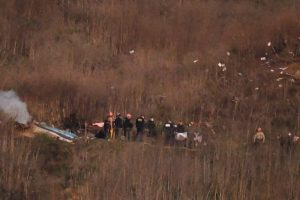