Tuesday night, three members of the National Guard of the United States died after their helicopter crashed in southern Lucky Peak in Idaho.

The accident occurred shortly after 8 p.m. Tuesday, when the UH-60 Black Hawk helicopter crashed in which the three pilots, who were participating in a routine training flight, crashed.

The cause of the accident is unknown at the moment, but an investigation will be opened, the Idaho National Guard reported.

“This is a tremendous loss to the Idaho National Guard and our community,” General Michael Garshak, Idaho adjutant general and commander of the state National Guard, said in a statement.

“Our thoughts and prayers are with families and loved ones as we work through this tragedy,” added Garshak.

Colonel Christopher Burt, a state aviation officer for the Idaho Army National Guard, said the aircraft was last contacted at 7:45 p.m., 15 minutes before the crash.

At approximately 12:15 a.m. on Wednesday, more than 4 hours after the helicopter fell, they managed to locate the aircraft and the personnel who were in it.

The state National Guard indicated that the names of the deceased will not be released until their families are notified. 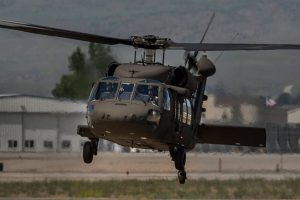 “The sudden and tragic loss of three of our fellow Guardsmen is extremely heartbreaking to every member of our Idaho National Guard family.
Throughout the day, our organization and members have received numerous messages of condolence from our community partners, elected leaders and fellow citizens here in Idaho and throughout the nation. We appreciate your continued support for our Soldiers and Airmen. We are fortunate, at such a challenging time, to have the care and support of so many.”