Post sponsored by the Montreal Jobs that have the best benefits

100 years have passed in February since the world’s first air control tower was erected. Located in what was then London’s main airport, the tower marked the beginning of the development of commercial aviation.

Today, it is unthinkable to organize air traffic without the iconic control towers present in all major airports.

From there, the operators coordinate the movements of thousands of airplanes so that they keep each other at a safe distance, direct their routes when there is bad weather, and decide the time of landing and takeoff trying to avoid delays but, above all, accidents .

But it wasn’t until passenger services began to increase in the 1920s, after the end of World War I, that the first air control tower in the world was erected at the main London airport, which at that time It was in Croydon, a town about 20 km south of the city.

This week (February 25), 100 years have passed since this 4.5-meter-high building and windows on all sides were commissioned by the Ministry of Air, a former United Kingdom ministerial department in charge of civil aviation and military that let work in the mid-60s.

“It was the first years of air travel and there was no road map of how things were going to work,” Ian Walker, director of the Historic Croydon Airport Trust, tells the BBC.

“In 1920 there was no idea of ​​what a control tower and even an airport should look like, so it was up to these pioneers to develop, test and implement the ideas that would allow air travel to grow safely,” says Walker.

At that time, the aerodromes had radio offices and a kind of aerial headlights, but none of these facilities had the specific purpose of providing air traffic services to airplanes.

It was the construction of this first tower that gave the initial kick so that commercial aviation could grow and develop.

Initially, the first commercial pilots flew in reconverted bombers, and could only do so when weather conditions were adequate. 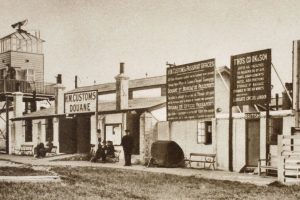 The tower, with windows on all sides, was erected in 1920.

But when commercial flights began to increase, and these began to be governed by dates and times, the need arose to be able to fly in all kinds of conditions.

Now it was not enough for the pilots to be guided by their own eyes helped by maps, so the newly formed International Air Navigation Commission established that the important airports should send and receive weather reports.

“What they did (these pioneers) was to use the most advanced technology they had at that time, the radio, to develop air traffic control,” Walker explains.

Simply, he adds, “they experimented to see what worked and what didn’t.”

The first controllers worked together with the radio operators, and gave weather information to the pilots by radio or through a system of flags or lights.

At Croydon airport they also used a service that allowed them to determine the position of the plane in the air.

“When a ship makes a radio transmission, we can track the origin of this signal. If the signal is captured by stations on the ground, the position of the aircraft can be triangulated,” says Walker. 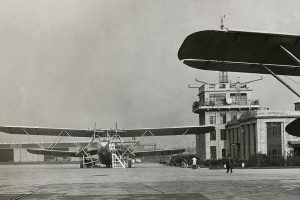 After the first, two more towers were built.

This information captured by three different stations was passed to Croydon, from where the position of the plane was calculated manually on a map, with threads and tacks, which was then passed to the pilot.

With this information, the controllers could also calculate the arrivals and departures of the aircraft.

Another of the great moments of aviation that goes back to this time of Croydon airport, was the invention of the help signal to alert of an emergency situation.

The word Mayday (pronounced meidei, and repeated three times), was coined by Fred Stanley Mockford, one of the first controllers of the Croydon tower, who took his inspiration from the French phrase m’aider, whose meaning is “help me”. 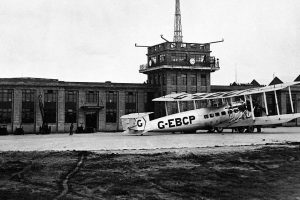 In the first years, the position of the flights was determined manually.

“It is a word that cannot be confused with anything else in aviation: it is not height, speed, visibility or wind. It is a word that differed from the others, and the industry accepted it in 1927 as the international standard.”

In 1923 a second tower was added in Croydon and the last one was erected in 1928. The airport continued to operate until 1959 and, in the year 2000, was transformed into a museum. 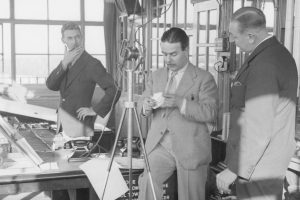 Croydon Airport is now a museum.