Few know that we conquered space thanks to the Nazis and animal cruelty.

We will soon reach Mars. It is a fact. In a couple of years, humanity will set foot on the red planet, colonize it and from there we will go to the rest of the solar system and then to the Universe! While Earthlings adventurers plow through space as proof of our greatest illusions, on Earth we will contemplate everything in fascination, like someone watching a science fiction movie. We will all be expectant, happy and worried about the trip to that spatial gloom that is the unknown. And we will all know deep down that this odyssey could have been possible thanks to the Nazis and animal cruelty, two pillars of modern society.

Yes, the trip to space came about thanks to the Nazis. While World War II was at its height, Hitler had the first long-range ballistic missile in history built in series, called the V-2. When the great war ended, the Americans took as booty one of those rockets and several physicists that served the 3rd Reich to help them conquer space. Thus began the adventure.

In time there was a need to travel into space. The first explorers weren’t going to the blonde heroes seen in pulp magazines or comic books. The first living things to reach space were Drosophila melanogaster, better known as “fruit flies”. In February 1947, they took off in a V2 in a shipment of corn seeds. In 3 minutes and 10 seconds, the rocket reached an altitude of 109 km, which exceeded the definitions of the limit of space. All the flies came back alive.

In ’49, the gringos launched a monkey named Albert I, but the rocket did not reach space. So it doesn’t count. The first mammal to reach space was called Albert 2 . They were launched from the United States in 1949. But when they returned, the parachute in their capsule did not work and… it was like papaya. Albert 3 and 4 also died.

Then came the cosmonaut dogs. The Russians sent the dogs Tsygan and Dezik aboard the ship -1 IIIA-1 in 1951. The two survived that trip, but Dezik would die on a later mission alongside another dog, named Lisa. In September of that year they were going to send a trained dog, named Bolik, but he escaped a day before takeoff and was replaced by ZIB, a stray dog ​​that was found prowling around the cosmodrome facilities. The mission was a success.

The Soviets sent many dogs into space. Many. Really. Until November 3, 1957, they put Sputnik 2 into orbit, the second spacecraft to travel around the planet. On board was Laika, whose name in Muscovite means Barker.

She will go down in history for being the first living being to orbit the Earth and for having died in a horrible way for the sake of science . It is estimated that she died between five and seven hours after takeoff due to stress, the capsule overheating and a lack of oxygen.

Oleg Georgievich Gazenko, one of the leading scientists involved in the Soviet space animals program, said in 1998 that there was nothing in that mission to justify Laika’s horrific death.

But that did not stop them from sending dogs, rabbits, mice, rats. Insects, guinea pigs and many more animals until 1966, when Veterok and Ugolyok were sent to orbit the Earth for 22 days. This was the longest unmanned flight by humans until Skylab June 2, 1973. Although it is still the longest flight performed by dogs. 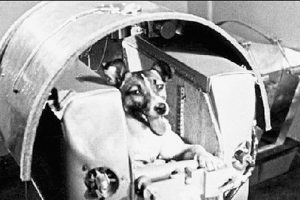 Meanwhile in the United States they continued with their Albertos program. On December 13, 1958, they sent Gordo, an air force-trained squirrel monkey who was a tough guy. During its return, it survived a gravity 10 times higher than Earth, 8 minutes of microgravity while its capsule traveled at 16 thousand kilometers per hour. What he did not survive was the failure of his parachute.

His capsule sank into the ground and was never recovered. A year later Able and Baker were sent and both monkeys came back alive, although Able died from anesthesia when an infected electrode was removed.

On January 31, 1961, at one of the most critical moments of the Space Race, a historic day was experienced: a Mercury project ship drove off Earth , for the first time in history, a hominid who returned healthy and saved our planet after flying over outer space for a few minutes. It was about Ham, a chimpanzee from Cameroon who was bought by the United States Air Force and brought to Holloman Air Base in 1959.

During his historic flight, Ham performed up to the expectations of NASA technicians , who knew him only as Number 65 (his trainers named him Chop Chop Chang). It reached a maximum height of 253 km above the Earth, higher than expected, being the first suborbital flight manned by a living being reached by the United States. During his flight, Ham had a 7-minute period of weightlessness that was not a problem for him. His capsule landed in the Atlantic Ocean, 679 km away from the launch point, and was successfully rescued by NASA technicians.

Ham was luckier than other NASA monkeys, who normally died from stress, or from test flight crashes. During his training, he was the most skilled chimpanzee to learn to move the ship’s levers, outperforming more than 40 candidates, suffering electric shocks when he was wrong, and receiving treats when he was right.

The friendly chimpanzee became a celebrity, and was able to live a comfortable life, first at the National Zoo in Washington and, finally, at the North Carolina Zoo, where he died in 1983 at the age of 26.

They were not and will not be the last animals we will send into space. Each year insects, mammals and reptiles travel together with spacecraft to orbit the planet alongside astronauts in countless experiments. The most recent occurred last year, when, after an accident, a colony of thousands of tardigrades were stranded on the moon and are now there trying to survive.