In the tragic case of the helicopter crash that killed 41-year-old retired Los Angeles Lakers star Kobe Bryant and eight other people, it is now supplemented by new allegations. Island Express, the company that operated the aircraft, blamed two air traffic controllers for the incident.

The lawsuit was filed in Los Angeles County Superior Court on August 21, 2020, blaming two air traffic controllers who worked on the fateful day for “a series of wrongful acts and / or omissions,” which led to the Sikorsky S-76 crashing into the hills near Calabasas, California on January 26, 2020, reported CBS News. Following the request of the Federal Aviation Administration, the names of the suspects are not made public.

Island Express faces at least four lawsuits over the case, including one from Bryant’s wife and three from relatives of other accident victims. In the counterclaim, the company accuses two air traffic controllers of causing an excessive workload and a level of stress to the pilot. “The pilot’s workload and the level of stress in deteriorating weather conditions were unnecessarily burdened by multiple errors,” he stated in the lawsuit.

Also, both are blamed for ineffective internal communication during a shift change just before the accident. “The failure to adequately communicate the completion of the radar flight tracking, the incomplete position relief briefing and the lack of knowledge of the current weather conditions, are those failures that significantly impacted the pilot’s ability to fly the aircraft,” he said. on the demand. 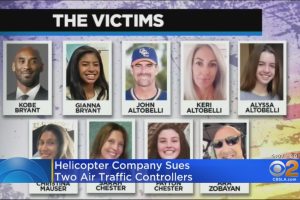 The misleading communication between the pilot and the two air traffic controllers allegedly became the main reason that led to the helicopter crashing. Just before the accident, the pilot reported that he had climbed when in fact he was descending. Your manned helicopter. It hit mountainous terrain in thick fog and caught fire killing everyone on board.