The sunset dyes the wings red. Looking down, you see a compact mass of gray clouds. More than one passenger has imagined those clouds unleashed in a storm. But if that were the case, the plane could avoid it without exposing itself to greater turbulence. The departure time was at 18:03, and one of the passengers, the one in seat 6A, wonders who came up with the idea of ​​splitting the hours into minutes to balance the flight schedules. What sense does it make to put 03 when it would not matter if it were 05. Although, think, is there a greater possibility of not missing punctuality? The man in seat 6A – he chose that location because he knows that it is the safest against the possibility of an accident – is an engineer and travels for work reasons, although, he muses, it would not be bad to extend it for a few days and take advantage of the beach, However, he does not firmly support that idea because he knows his inability to give himself permissions. Few things are allowed.

Seat 12A. This woman is upset. She is not superstitious and is used to riding in seat 13. She always said that 13 is her lucky number and has discovered that that row of seats is usually left empty. She chooses it and is more comfortable. As she traveled often, she realized the hidden side of the superstition of others by avoiding that line. But she is not like that, she thinks proudly, on the contrary, she chooses her. Today she feels annoyed, and even apprehensive, registers the fear biting the side of her chest. Something began to fracture when she asked for a seat in row 13 and they told her that row 13 does not exist on this plane. It is not there, it does not exist. They jump from 12 to 14. And she is suspended in a row that is not there and that has always protected her from misfortune.

The passenger in seat 18E is anxious. But his anxiety is not from now, that’s how he got to the airport. It feels weird about this trip. He was late for boarding, without having done the advance check, and was given, as a last possibility, seat E. He feels the filling of a sandwich. On one side a man reading a newspaper the size of a sheet, opening his arms and invading, indifferently, a part of his space. On the other is a young woman who wears a perfume that stirs up imprecise memories. He travels to meet someone he met online. After several years of being alone, he decided on that option almost like a game, however, six months of written communications and videos have passed that come and go, and now he feels in love. He carries a suitcase in the cabin, scantily clad but brimming with expectations and fears. He does not notice it yet, but during the journey the perfume of the passenger next door will insistently envelop him, and even more the chat that they will have as if they had always been known. The final closure will be when she rests her head on his shoulder as she falls asleep, and he smells her fresh shampoo and dawn, imagined, after a night of love. He doesn’t know yet but when he gets off the plane he will have made the decision to leave that virtual shadow that accompanied him for six months waiting.

Two eyes travel in seat 23D. Huge, hungry, attentive, absorbing everything around them, and a hand holding a pen that dumps almost everything caught by those eyes into a battered gray notebook. The passenger in seat 23D, aisle, is a writer and has expressly chosen the last row of the plane. From that location you can have an extended view of the seats that carry stories. In addition, that place is a must when passengers go to the bathroom. She is soaked in details at that moment. Hang on each body a story, perhaps real or only imagined. But she does not care, in the end she knows that it is the same. She knows that before it was a cavern full of shadows and today it can be an airplane. This is how the story of that woman wearing a chinstrap has hunted. First think she’s ridiculous. Then she regrets and blames herself,. you are likely to have problems with your immunity. And at the end – and there he begins to build a story for a story – imagine that this woman is the first sign of some ferocious pandemic that threatens the world. That woman who, scared to death, has been making stopovers since she left a remote country where the chinstrap was mandatory. 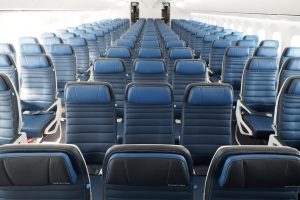 The twenty-nine rows, and the six seats per row, begin to creak when, yes, the storm can hit them. Perhaps not even the pilot – who has been locked in the bathroom for a while – knows why there was such a rapid descent that introduced the plane into the area of ​​those compact clouds. And neither does he or the copilot know what things can happen when turbulence squeezes that plane as the role of a cigarette bundle was squeezed over the embers of some fire a long time ago.