There will be no way you will forget to put on your mask on your next flight. The airline ‘Garuda Indonesia’, the most important in the Asian country, is putting face masks on its planes to raise awareness about the importance of their use during flights and to reinforce health measures to combat COVID-19 infections.

The airline itself used its Twitter account on October 1, 2020 to present the new distinctive of the Airbus A3300neo fleet, acquired in November 2019. There are four different designs, one with turquoise blue masks, which will be in the air as of October 2020. Two other aircraft that will fly with masks in light blue and plumbago blue respectively, as well as one more aircraft in red.

However, these will be put into operation over the next two years.  “It took 60 people and 120 hours of work for Neo planes to wear masks, unlike us who don’t need as much effort to wear one. Be part of [this experience] by committing to always wear a mask,” read Garuda Indonesia’s Twitter account.

But that is not all. The airline launched a contest for its own users to design new masks, based on a predetermined color palette. The best four designs will be placed in the rest of your fleet.

According to Jacarta Post, the airline has received a series of complaints from users, who demand that flight attendants not use masks, because in this way they cannot know if the crew is smiling or frowning at them. Clearly, the airline cannot encourage others to wear a mask if they do not set an example themselves.

In response, the president of Garuda Indonesia announced that they were considering the use of face shields by flight attendants as an alternative to face masks to ensure positive interactions between crew and travellers, but after conducting a congruence exercise, he announced that they will not replace face masks, but will complement the safety of its staff.  Thus, you even want to travel to the island country. 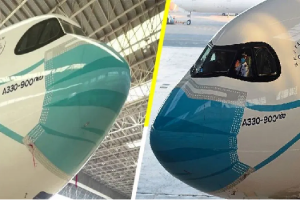