The actor received an Honorary Naval Aviator certificate for his role as a pilot in Top Gun.

As Tom Cruise prepares what will be the first film ever shot in space, he received an honorary naval aviation certificate for his role as the expert pilot Maverick in Top Gun.

At a ceremony held at Paramount Studios in Los Angeles, the actor was awarded the 35th Honorary Naval Aviator certificate, while the producer received the 36th certificate for the same category.

“In the history of cinema, there is no aviation film more iconic than 1986’s Top Gun,” the Naval Air Force said in a statement.

“Its characters, dialogue and images are ingrained in the minds of an entire generation of Americans. The film captured the hearts of millions, which has had a profound positive impact on recruiting for Naval Aviation,” he says.

The statement continues to highlight Top Gun’s ability to bring the world of aviation closer to millions of young people.

“He has significantly promoted and supported Naval Aviation and put aircraft carriers and aircraft in pop culture,”he highlights while praising how the film reproduces the strategies, equipment and tactics of the US Air Force.

While Bruckheimer was present at the ceremony to receive the honorary title, Cruise had to do it through a video call, as he is currently filming Mission Impossible 7 in different European enclaves.

Cruise also holds the title of Certified Pilot, and has flown all kinds of vehicles in both his movies and in real life, including the sequel to Top Gun: Maverick, whose release has been delayed until July 1, 2021 after the release. coronavirus pandemic.

The actor is also known for his determination to shoot his most extreme action scenes himself and without doubles. 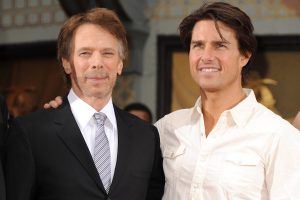