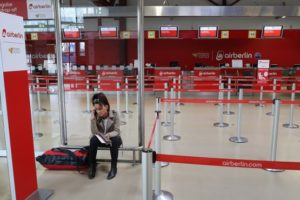 Bankrupted German airline Air Berlin intends to complete the sale of its assets by the end of September, according to CEO Thomas Winkelmann. The airline managed had talks with over ten interested parties, including several airlines. Among the candidates for the acquisition of the activity is also the largest German airline Lufthansa, for which the negotiations have been confirmed.

“We want to end the deal by the end of September, or we may lose customers confidence”, said Thomas Winkelmann. According to him, the buyer will not be one but two or three. This coincided with the opinion of the federal government, which spoke against a deal with only one owner.

The officials refuse to share more details for the negotiation with bankrupted Air Berlin, but according to sources, interested parties include Easyjet, Tuifly and Thomas Cook’s subsidiary Condor Airlines.

Lufthansa, which leases 38 of the 140 aircraft of the Air Berlin, wants to acquire up to 70 machines, some of which for long distances, as well as 21 Niki airplanes, the Austrian subsidiary of Air Berlin. The group plans to keep up to 3,000 employees out of a total of 8,000 in the troubled airline.

Bavarian entrepreneur Hans Rudolf Woehrl publicly expressed his interest in buying the bankrupted Air Berlin himself, without submitting a specific offer. From Air Berlin, the Nuremberg businessman is just a PR move. Hans Rudolf Woehrl himself accused the government of benefiting Lufthansa. Similar reproach was given by Irish low-cost Ryanair on the 150 million EUR bridge loan from Berlin to continue its flights until buyers are found.

The committee of creditors has also been criticized, which ultimately has to decide on the sale. It also includes a representative of Eurowings, a low-budget subsidiary of Lufthansa. The reason for his presence in the committee is the fact that Eurowings has hired 38 Air Berlin aircraft. The creditor committee has to verify the sustainability of the different bids.

“Candidates must be fully exposed and this will give Lufthansa the chance to study the business models seamlessly”, said Eurowings representative.

Air Berlin’s financial position has been available for inspection by all stakeholders in specially protected premises since the end of the year.