As was to be expected – and we published it here a couple of weeks ago – if Donald Trump could not boycott the result of the elections he lost, he would light the fuse of a bomb in Iran for his successor Joe Biden.

It is possible, though not likely, that the war will be stopped, but we are on a very high risk route.

With the assassination of Iranian scientist Mohsen Fakhrizadeh last Friday, apparently by Israel and the complacency of the Trump administration, the crisis with that country will become unmanageable for President Biden.

It will need the help of the diplomacy of the European allies, who have been left without the slightest interest in strengthening the relationship with the United States after four years of grievances.

How to believe a country that changes its mind every four years, and also enters and leaves fundamental agreements?

Iran, for its part, is going to make it more expensive to return to the nuclear deal with the US to limits that could be unpayable for the Biden administration.

Netanyahu, read Trump, lit the fuse in the Middle East, in an unfair act.

The lack of humility of the defeated, who still alleges fraud, puts the national security of his country at risk.

Thus the chain of events that put Biden in a labyrinth from which he will not be able to get out even with Ariadna’s thread:

-On Friday, Mohsen Fakhrizadeh was assassinated in Iran, whom the Trump and Netanyahu governments pointed to as the mastermind of the Iranian nuclear program. That country promised revenge for that terrorist act.

-Iran has elections next year, and its president, the moderate Hasan Rohaní, is pressured by the radical Islamic sectors that make up the opposition in his country, due to the lack of energy to deal with the United States. If he does not want to lose the elections, he must answer strongly to the assassination of scientist Fakhrizadeh.

-On Saturday November 21, General Greg Guillot, commander of the Air Force of this country, issued a press bulletin in which he reported the departure to the Middle East of an undetermined number of bombers to “deter aggression (?) And reassure to partners and allies… These missions will help bomber crews to familiarize themselves with the airspace and command and control functions (in order) to seize, retain and execute the initiative ”.

-Trump’s ‘maximum pressure’ campaign against Iran, which began with the unilateral breaking of the nuclear agreement with the Persian country, has achieved the following:

-Joseph Biden has said that he will resume the nuclear control agreement with Iran, to prevent it from becoming nuclear weapons.

-The president of Iran declared, after the triumph of Biden, that he would agree to comply with the agreement, and that it was an opportunity “for the United States to make up for its previous mistakes and return to the path of complying with the signed agreements.”

-That verb, “compensate”, now means a much higher price, after the crime this Friday.

-Biden would have to pay, with money from United States taxpayers, the compensation for the damages caused by the Trump embargo, which amount to billions of dollars. 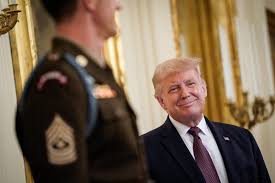 -The Iranian population, impoverished by trade sanctions, and humiliated by the assassination of Fakhrizadeh, will demand war against the United States and Israel. Or topple the government.

Yes, open war may not break out, but it will be very difficult to avoid a concatenation of Iranian attacks on Israeli or American targets. And the subsequent counterattacks.

That size is the complication that Biden will inherit in the Middle East.

Newer PostAnd you, would you fly aboard a Boeing 737 MAX?
Older PostThe US Air Force has ‘studied every piece of concrete in the Pacific’ to Find New Places to Fight From