During the last days of his term as president of the United States, Donald Trump has been advising himself on what is the process to be able to name airports in honour of the former presidents of the nation, as revealed by two people familiar with the matter, who asked to remain anonymous, to the American media The Daily Beast .

According to one of the sources, he mentioned that during the last three weeks, President Trump expressed that “no president” wants an airport that bears his name, has a bad reputation or an infrastructure in ruins. The other source added that during the 2020 elections, he asked what kind of “paperwork” was necessary for an airport to bear the name of a former president.

This is not the first time that Trump has tried to change the name of an airport, at the beginning of 2018, he expressed his wishes that some national or international airport be named after “Donald J. Trump.” Also in that same year, he mentioned that he would like some US Navy aircraft carrier to be christened “USS Donald Trump.”

It is normal to find that airports are named after politicians. The San José airport is named after Norm Mineta, the Secretary of Transportation who first oversaw the TSA (before the Department of Homeland Security existed). Little Rock Airport is now Bill and Hillary Clinton National Airport. The Houston Intercontinental is named after Bush 41.

The New York Idlewild was renamed in honour of JFK. There’s Gerald Ford Airport in Grand Rapids, Michigan. And the Wichita airport is named after Dwight Eisenhower. So it is not going to be unusual for some of the airports to be renamed after his tenure and end up with Trump’s name. Which airport do you think would be the best to bear the name “Donald J. Trump“? 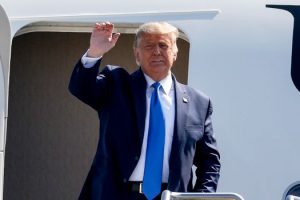