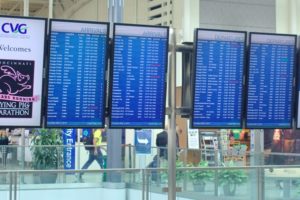 About 30% of world airlines have adopted programs to ensure cybersecurity, according to the international company SITA, which provides telecommunications services in the aviation industry. The experts claim that situation in airports is even more tragic, as only 20% of the facilities developed security digital environment.

“This year, in addition to proper protection from cyberthreats, the industry has also focused on their identification and management of response measures. In 69% of airlines and 47% of airports, the heads of digitalization services are already implementing systems for monitoring and correlating security events, and 77% of airlines and 60% of airports are adopting rapid response systems for accidents”, says the SITA report.

According to the Director General of SITA, Barbara Dalibard, the airlines and airports should pay more attention to protection from hacker attacks.

“The air transport industry is characterized by a high intensity of the use of information and communication networks and dependence on partners. Therefore, in the fight against global threats to cybersecurity, we must act as a single community. We are pleased that over the past year the number of airlines ready to withstand large cyber threats has increased by 46%, however, much remains to be done”, said Barbara Dalibard. “Airlines and airports, building their own critical systems, are preparing to repel conventional threats. But we all should start to consider this problem at the highest level and make cybersecurity issues an integral part of the agenda of our leaders and boards of directors”, added she.

According to the SITA study, more than 80% of airline and airport staff are aware of security concerns.

International company SITA specializes in developing solutions in the field of information and telecommunication systems. The company is present in more than 1000 airports around the world, and its solutions for border control are used in 30 countries. Consolidated revenue of the company in 2016 was 1.5 billion USD.