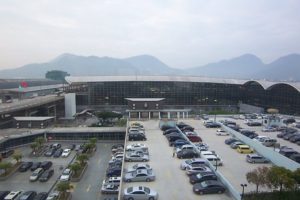 About 320 flights were canceled at the Hong Kong International Airport due to the coming of the powerful typhoon Hato, which paralyzed public transport. The meteorologists warn that a typhoon is a significant danger for the city. On Wednesday morning, the level of storm danger was raised to the ninth, and then (for the first time in five years) to the highest, tenth level.

As of 6:00 about 320 flights of Cathay Pacific, Cathay Dragon and Hong Kong Airlines were canceled at Hong Kong International Airport.

Trains on all lines of the Hong Kong subway go in a 15-minute interval, suspended is the traffic on all land segments of the metro, traffic to the airport is also stopped, the ferry and bus services are almost completely paralyzed.

Schools, state institutions, a number of offices and banks of the city will be closed throughout the day, trades on the Hong Kong stock exchange are suspended.

Meteorologists warn of increased rain and wind in the next few hours, as well as the possibility of flooding low-lying coastal areas due to rising sea level. Residents of the city and adjacent areas are advised to stay indoors, but do not approach windows and glass doors, avoid the coast.