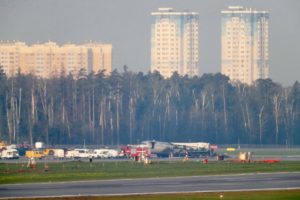 A total of 41 people, including at least two children and one crew member, died on Sunday after Aeroflot airplane SSJ100 burst into flames during an emergency landing at Moscow’s Sheremetyevo Airport.

Footage from the incident shows how the Sukhoi Superjet 100 airplane explodes in flames and slid to a stop on the grass between runway 24L and two taxiways, where passengers left through emergency exits.

According to the investigators, none of the landing gears of the plane opened during landing and hit the fuel tank.

The aircraft was performing flight SU1492 from Moscow Sheremetyevo Airport to Murmansk, but shortly after takeoff as hit by lighting and was forced to return to Moskow, were attempted to land. A total of 78 people were on board the airplane during the accident. Totally 37 people survived, while 41 were reported dead.

An investigation into the incident has begun and the company has triggered a crisis headquarters.

Russian investigation committee spokeswoman Svetlana Petrenko said clear results on the causes and circumstances surrounding the incident would be presented after a thorough data-based investigation.