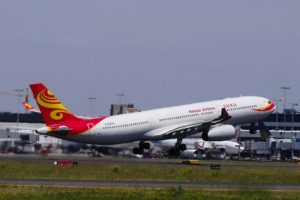 Only 50.76% of the flights of Chinese airlines were carried out according to the schedule in July 2017, due to extreme summer weather, as well as showers and typhoons. According to the data of the General Directorate of Civil Aviation, in July this year, totally 448,370 flights were carried out by Chinese airlines, representing a increase of 5.69% yoy. The average daily flights were 14,464. Despite all this, the flight schedule was observed only by 50.76%.

The normal course of implementation of the schedule of civil aviation flights was influenced, first of all, by unfavorable weather, which affected 58.6% from all delayed flights.

In addition, activity in the airspace is also one of the factors that led to the delay in flights, in particular, it affected 25.99% from all delayed flights.

The activity of aircraft in terms of scale, multiplicity, duration was the highest in July, which seriously affected the operation of airports in North, East and Central China, as well as in other parts of the country.

Along with this, in January-July this year, Chinese airlines provided 6.031 million hours of accident-free flights of aircraft, which represents an increase of 11.5%. It was transported 312 million people, which is 13.2% yoy more.