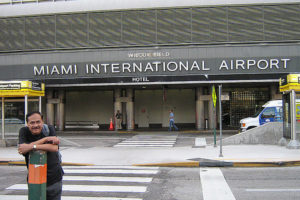 About 600 flights were canceled at Miami International airport in the US state of Florida on Friday against the approach of the hurricane Irma. The number of cancelled flight is about half of the all planned flights. According to the information, 247 flights from Miami (40%) and 317 flights arriving to the city airport (57%) were canceled. It is also noted that another 27 flights were also stopped.

Hurricane Irma moves along the islands of the Caribbean and can reach the coast of Florida at the weekend. The territory of Florida and the surrounding states declared a state of emergency, in a number of areas also announced the evacuation.

Hurricane Irma is called the most powerful in the Atlantic at least for the last decade. The experts believe that it is stronger than the hurricane Harvey, which in late August hit the coast of Texas and led to a catastrophic flood.

Earlier, the US National Center for the Prevention of Hurricanes reported that the hurricane Irma had eased to the fourth category, but continues to pose a danger.