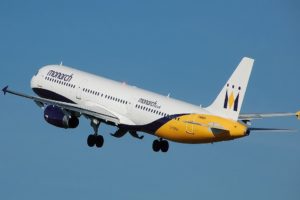 About 80,000 passengers from the bankrupted British Monarch Airlines have now returned to the United Kingdom, reported to the parliament the Minister of Transport Chris Grayling. Thus, according to him, the British authorities fulfilled 75% of the plan for the return of 110,000 citizens, who were stuck abroad.

“About 80,000 passengers returned to the UK, which is almost three quarters of the total number of those abroad at the time of the bankruptcy of Monarch Airlines”, said the minister, emphasizing that the priority of the British authorities is the return of all remaining passengers to their homeland. Chris Grayling also assured about 2,000 former employees of Monarch Airlines will be provided with all the necessary support, including assistance in arranging for a new job.

The fifth-largest airline of UK, Monarch Airlines, stopped flights on October 2, due to financial difficulties. As a result, over a hundred thousand people remained abroad and about 300,000 bookings were canceled. Later, the British authorities announced the largest in peacetime operation in order to return the stuck passengers to UK.