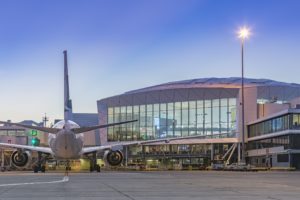 Dogs will help passengers cope with aerophobia at Sydney airport. The Australian non-profit organization, together with the American airline, launched a charity project that simultaneously reduces the nervous tension of passengers before the flight and training the necessary skills to guide dogs.

Twice a week, on Tuesdays and Thursdays, at the Sydney airport, tourists in the check-in area can meet guide dogs, stroke them, hug them or play with them. Experts note that thanks to the animals, the atmosphere in the departure zone has become much calmer and more pleasant, and passengers feel happier and more relaxed.

Dogs, being in the airport building, learn to behave correctly, learn the location of escalators, elevators, which is useful in their future work. Training a guide dog in Sydney takes two years and costs 35,000 USD.

Sydney is an international airport in Australia located 8 km (5 mi) south of the city centre, in the suburb of Mascot. It is the primary airport serving Sydney and is a primary hub for Qantas, as well as a secondary hub for Virgin Australia and Jetstar Airways. Situated next to Botany Bay, the airport has three runways, colloquially known as the east–west, north–south and third runways.

Sydney Airport is one of the world’s longest continuously operated commercial airports and the busiest airport in Australia, handling 42.6 million passengers and 348,904 aircraft movements in 2016–17. It was the 38th busiest airport in the world in 2016. Currently 46 domestic and 43 international destinations are served to Sydney directly.