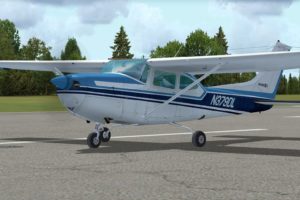 Light aircraft Cessna 182 crashed at the Herberton Range, south of Atherton in Far North Queensland, Australia. Following the crash, the aircraft sustained unreported damage and the sole pilot received fatal injuries and died at the scene.

The plane was en route from Mount Garnet Airport to Atherton Aerodrome, but shortly before the arriving to destination disappeared from the radars. The wreckage was found during an aerial search of the Herberton Range, close to 110 km south-west of the city of Cairns.

Emergency services arrived at the scene of the accident but noticed that the pilot was already dead.

Cessna 182 Skylane is an American four-seat, single-engined light airplane, built by Cessna of Wichita, Kansas. It has the option of adding two child seats, installed in the baggage area. The Cessna 182 is an all-metal (mostly aluminum alloy) aircraft, although some parts – such as engine cowling nosebowl and wingtips – are made of fiberglass or thermoplastic material.