NASA has found three new planets and one of them is a type of world not seen in our own solar system.

The mysterious planet is a “missing link” world and could be a great gift for researchers looking for extraterrestrial worlds.

The three planets of the TOI-270 system orbit around a dwarf star that is only 73 light years from us. That makes them the closest exoplanets ever found, in addition to being the smallest, which means that astronomers have a particularly good view of the worlds.

The trio – a rocky planet of slightly larger size than Earth and two that are half that of Neptune (called subneptunes) – were discovered by researchers who used NASA’s Exoplanet Survey Satellite (TESS), which was launched into space in 2018, and has been scanning the universe for stars and planets that could withstand alien life.

TOI-270 b is a rocky super-earth, which is slightly larger than our planet. That makes it a “missing link,” between smaller rocky worlds like our own Earth or Mars, and much larger gaseous planets like Saturn and Jupiter. 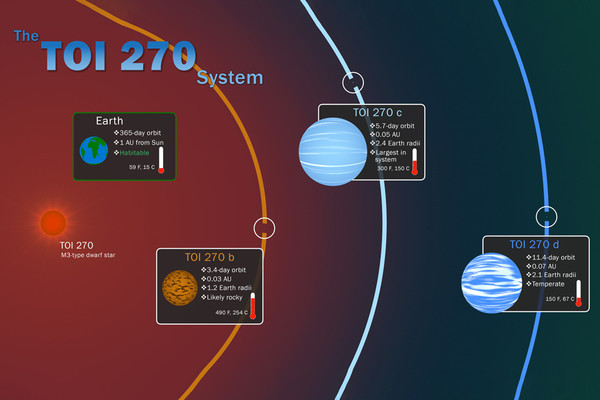 The researchers hope to use the planet to understand why there are so few worlds of that size, as well as to clarify how the planets were found in our solar system.

“TOI-270 will soon allow us to study this ‘missing link’ between the rocky planets similar to Earth and the dominant subneptunes, because here all these types were formed in the same system,” says lead researcher  Maximilian Gunther of the Institute of Technology from Massachusetts.

Alongside that planet there are two gaseous worlds that are about twice the size of our world. One of them, TOI 270 d, the furthest from the star, is believed to be in the temperature range that could allow it to withstand alien life, but its atmosphere is expected to be so thick and dense that it stores a lot of heat, and the Surface is probably too hot.

“TOI-270 is a true Disneyland for the science of exoplanets, and one of the main systems that TESS set out to discover,” says Gunther.

“It’s an exceptional laboratory, not for a single reason, but for many reasons – it really ticks in all the boxes.”

The Astrophysics Institute of the Canary Islands (IAC) and other Spanish institutions participated in the discovery and has been published in the journal “Nature Astronomy”.