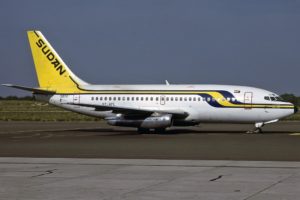 A passenger tried to hijack Sudan Airways Boeing 737-300, which was performing flight 103 with 91 passengers en route from Cairo, Egypt to Khartoum, Sudan. The passenger who attempted to enter the cabin with the intention of hijacking the plane was among a number of passengers who were deported for reasons of flight from Egypt, but the crew managed to control the situation and arrested him.

The flight continued to the airport of destination and arrived safely at Khartoum, Sudan. There were no reported injuries during the accident.

Sudanese authorities praised the crew for dealing with the passenger until the plane landed.

On flight 103, there were 91 passengers and 26 Sudanese who were deported back to the Central African country.

Sudan Airways is the national airline of Sudan, headquartered in Khartoum. Since 2012, the company has been fully owned by the Government of Sudan. One of the oldest African carriers, it was formed in February 1946 and started scheduled operations in July the following year. It is a member of the International Air Transport Association, of the Arab Air Carriers Organization since 1965, and of the African Airlines Association since 1968, becoming a founding member along with another ten companies. As of December 2011, Sudan Airways had 1,700 employees. The airline has been included in the list of air carriers banned in the European Union since March 2010.