Economic Criminal Judge Javier López Biscayart arrested a leader of the Association of Aeronautical Technical Personnel (APTA) for the attempted smuggling of 87.5 kilos of cocaine in a KLM plane.

This is Jorge Álvarez, trade union secretary of the guild led by Ricardo Cirielli.

“We started investigating them from a telephone listening,” a source of the investigation confirmed to Infobae.

Alvarez testified on Monday in the case and was arrested at the request of a request from prosecutor Emilio Guerberoff.

In addition to being an important unionist, the detainee is the uncle of Adrián Álvarez, one of those who had been filmed by the airport security cameras when the boxes with cocaine were uploaded to the plane’s hold.

It is suspected that the drug arrived at the airport in that person’s truck, which managed to circumvent all controls.

Investigators believe that the narco band made shipments of that drug and received a shipment of ecstasy from Europe as an exchange.

The key to arrive at this suspicion was a chemical report that determined the discovery of traces of cocaine, marijuana and ecstasy in the Dodge RAM truck belonging to Alvarez.

His uncle declared today and admitted his participation although he would have said he did not know what was stored in the shed.

“The new detainee works at the Andes airline, which operates in the north of the country and has deposits in Ezeiza,” a judicial source warned.

As soon as the detention was transcended, the guild leading Cirielli decided to suspend him and issued a statement in which he informed that he had already asked for a license, probably knowing that his situation was compromised.

“Due to its current procedural situation, the APTA Board of Directors decided unanimously to suspend Mr. Jorge Álvarez for an indeterminate period,” the statement said. 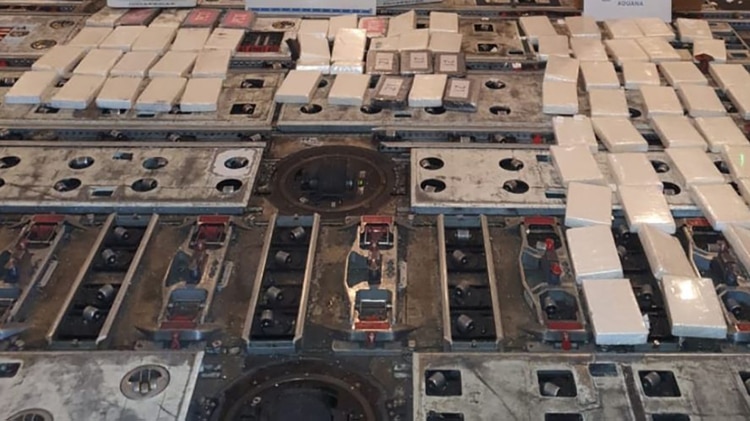 The case broke out on January 14. The drug was in the hold of the KLM Cargo plane, whose final destination was the Amsterdam airport in the Netherlands, where that cargo is valued at 7 million euros.

The plane, which was loaded with parcels and with almost fifty race and polo horses that had Singapore as their final destination, had arrived at 10.45 from San Pablo (Brazil) and had planned to make a stopover in Quito (Ecuador) before to reach its final destination, which was the city of Amsterdam.

Another of the detainees, Victor Gil, who had also been filmed climbing the boxes with the drug, directly accused his partner Adrián Álvarez, 33.

“I have known him for ten years and I didn’t expect him to do this, not only to me but to my source of work, and not only to me but also to all my colleagues (…) I feel used in a terrible way, it’s like If it were a toilet paper that you wipe your ass and throws you only as a benefit from it. That guy does not deserve to step on Earth, he has to be on the moon, I never met such a bad person in life,” Gil said in his inquiry.

The two were processed at the end of January by López Biscayart. A reserved identity witness was key in ensuring that he saw two people board the plane with three boxes and did not hesitate to point to Gil and Alvarez.

The judge also processed in that resolution the firm Martinair Cargo, responsible for the plane and linked to KLM.

“It is not just a case of infidelity of their dependents. Martinair did not establish and exercise suitable measures to ensure the safety of its operation and, in particular, the plane. The video and the photographs of the moment when the boxes get on the plane are illustrative. There is no one visible in the surroundings. The runway had been converted into a truly liberated area, and the plane drifting,” he said.

At the end of January, López Biscayart had also ordered the release of six other detainees in the case: they were the flight crew and the other operators.