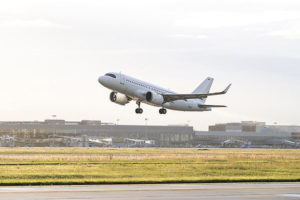 As part of the certification test program, the aircraft ACJ319neo spent 16 hours and 10 minutes in the air, which was the longest flight ever performed by Airbus pilots on A320 aircraft. The plane took off from Toulouse, flew to North Greenland, and then returned. As part of the test flight, a deviation from the route of up to 180 minutes according to ETOPS standards was also simulated.

Upon completion of the test program, this board will be supplied to K5 Aviation (Germany), which performs VIP class charter transportation. The plane has five additional fuel tanks in the cargo hold.

“We want our customers to reach their destination in the fastest way while enjoying the highest comfort in flight. It’s amazing how this aircraft combines all the necessary qualities for this”, said Eric Scheidt, executive director and senior pilot of K5 Aviation, who took part in the flight.

The ACJ319neo aircraft is the VIP version of the passenger version A319neo. In addition to the new engines, sharklet wingtips are also installed on the aircraft. Currently, Airbus has received 14 orders for aircraft of the ACJ320neo family.

ACJ aircraft set new standards in the business air travel market, both in terms of passenger comfort and in terms of operational efficiency. It is these liners in most cases give preference to operators and private customers. Experience in operating these aircraft has shown that customers appreciate the high level of comfort, increased individual space, and the possibility of free movement on board. In addition, these aircraft embody all the most advanced technological advances: EDSU, the ability to install additional fuel tanks, composite materials, improved avionics and navigation systems, operational technical support worldwide. In total, Airbus delivered about 200 ACJ aircraft to customers.