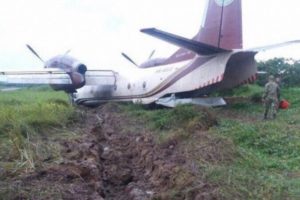 AerCaribe aircraft Antonov AN-32B left the runway while landing at Airport of Tarapaca in Colombia and dragged into the field. The airplane was landing at the airport with 43 passengers, but due to heavy rain deviated right off the runway 25 and slipped into the grass. Fortunately during the incident there were no reported injuries, but the aircraft suffered substantial damage.

The local authorities immediately evacuated all the people from the troubled plane and transported them to the airport. There were no serious injuries, but medical teams were at the place to check the people.

Antonov An-32 is a twin-engined turboprop transport and passenger aircraft. The transport multipurpose aircraft can be operated under various climatic conditions, including in hot climates and airfields on high. The main purpose of the aircraft is transportation on the lines of short and medium range. The aircraft has a high maneuverability when flying at mountain airfields with difficult approaches.