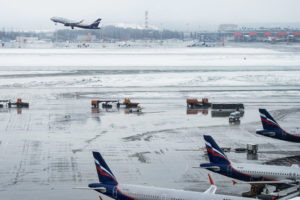 Aeroflot aircraft Boeing 737-800, which was performing flight SU1963, suffered a runway excursion during landing at Moscow’s Sheremetyevo Airport in Russia. The aircraft was performing a flight from Astana to Moscow with 78 passengers and 7 crew members on board but during taxing to the terminal, the nose landing gear slid off the side of the taxiway and rolled 1.50 meters past the runway end. There were no reported injuries during the incident.

Sheremetyevo airport services immediately arrived at the scene to conduct an emergency rescue operation. All passengers and crew members were disembarked at the taxiway and bussed to the terminal.

The aircraft was towed to the parking lot.

Services of the Sheremetyevo airport in the shortest possible time provided the necessary arrangements for disembarking passengers, towing the aircraft and eliminating the consequences of rolling out the aircraft in order to minimize difficulties and delays for flights, also clarified at the airport.