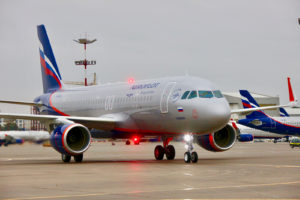 Russian Aeroflot Group publishes the operational results for June and first half of 2018. During the six months of 2018, Aeroflot carried 24.9 million passengers, represented an increase of 8.2% over the same period last year. The passenger turnover of the Group increased by 7.7% compared to the same period last year, the company’s passenger turnover – by 5.0%. The percentage of passenger seats occupied by the Aeroflot Group decreased by 0.6 percentage points as compared to the same period of the previous year and amounted to 80.0%, according to the company, the index decreased by 2.3 percentage points to 78.0%.

In June 2018, the Aeroflot Group transported 5.2 million passengers, which is 11.4% higher than the result for June 2017 – thus continuing the trend to accelerate the pace of operational development.

On international flights in June 2018, the number of passengers carried by the Aeroflot Group increased by 11.2% compared to the same period last year, passenger turnover increased by 9.2%. The growth of transportation capacity for the period was 9.8%.