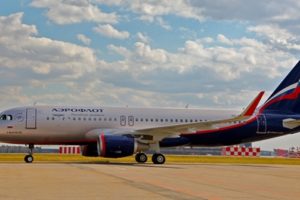 Aeroflot became the first Russian air carrier, which fully implemented the transition to an automated information system providing electronic customs declaration of aircraft and goods carried by them on international flights. The project was completed in cooperation with Federal Customs Service of Russia. The introduction of this system will in the future completely eliminate the use of paper carriers in the process of preparation by the carrier of the general declaration of the aircraft, which includes data on the aircraft, supplies, passengers, goods necessary for customs purposes and taking appropriate decisions by the customs authority.

“The provision of information in electronic form significantly reduces the time of the air carrier for the preparation of documents and the time when customs operations are performed by customs authorities, which generally optimizes the delivery of goods and speeds up the procedure for obtaining goods by the consignee, while the quality of customs control remains high, The analysis of the information provided begins before the arrival of the vehicle and is carried out either by an automated agent or by an official directly”, says the official statement of Aeroflot.

Work on the transition to electronic declarations is conducted by Aeroflot in cooperation with the Federal Customs Service of Russia as part of the implementation of the decision of the Eurasian Economic Commission “on preliminary information on the import of goods into the customs territory of the Eurasian Economic Union by air transport”. In 2013, Aeroflot jointly with the FCS of Russia launched the development of an automated information system for electronic customs declaration of aircraft, which in 2016 was pre-tested and in 2017 successfully introduced into commercial operation.

At present, cooperation in this direction continues. The FCS of Russia and Aeroflot are aimed at the transition to full electronic interaction from the provision of preliminary information to the release of goods.