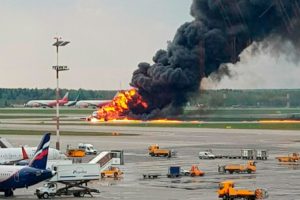 The Board of the Russian airline Aeroflot decided to pay compensation to all passengers and families of those who died in the crash of flight SU1492 from Moscow to Murmansk, which was engulfed by flames during emergency landing at Sheremetyevo Airport. This deadly crashed killed 41 people from the people on board.

Passengers can apply for payment at the Aeroflot representative office in Murmansk or at the company’s own sales offices in Moscow. Five million rubles will be paid to relatives for each dead passenger of flight SU1492.

The indicated amounts will be paid by Aeroflot in addition to the obligatory insurance payments provided for by Federal Law.

A total of 41 people, including at least two children and one crew member, died on Sunday after Aeroflot airplane SSJ100 burst into flames during an emergency landing at Moscow’s Sheremetyevo Airport. According to the investigators, none of the landing gears of the plane opened during landing and the fuel tank was hit by the runway, which caused the inflammation. The investigation is underway.

More about the accident:
41 dead after Aeroflot SSJ100 burst into flames during emergency landing at Sheremetyevo Airport [06/05]