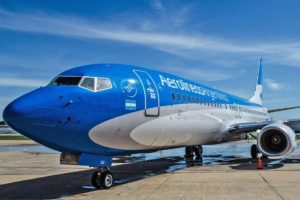 The Argentine national carrier Aerolineas Argentinas announced its decision to cancel flights to Venezuela on August 5, due to problems with security. The company makes one flight to Caracas once per week, but already in 2016 the crew and plane stayed at night not in the capital of Venezuela, but in neighboring Colombia.

“The weekly flight is canceled from August 5 for operational reasons and to ensure security of the crew”, said the official statement of Aerolineas Argentinas.

Last days, many air carriers have canceled flights to Venezuela, mainly due to the unstable internal political situation and the inability to ensure flight safety in such conditions. Among them are Iberia, Air France and one of the largest air carriers of Latin America Avianca. Daily flights to Caracas have also been suspended by American United Airlines. Flights to the South American country were terminated by Lufthansa and Air Canada. The carriers explained their decision as loss-making flights, as well as uneasy situation in the country.

In Venezuela, since the beginning of April, there have been mass protests after the decision of the Supreme Court to severely restrict the power of the opposition National Assembly. The decision was canceled, but opposition supporters took to the streets demanding the resignation of the members of the court and holding early elections, and also against convocation of the constituent assembly, considering it an attempt to change the constitution. The death toll, according to recent reports, is more than 120 people.