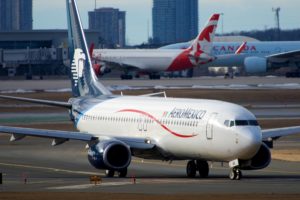 Aeromexico Boeing 737-800 collided with drone during landing at Tijuana airport in Mexico. The plane served a domestic flight from Guadalajara to Tijuana. Shortly before the landing, the crew heard the sound of a strong blow and asked the command and control center to check whether the nose was damaged.

Despite the emergency situation, the landing went well, none of the passengers was injured.

Mexican aviation authorities initiated investigating for the incident. According to media reports, the preliminary version is a collision with a drone. It is noted that, although the law prohibits drones from flying around airports, a huge number of small devices are not tracked on radars, and owners of UAVs do not know the rules for their use or neglect them.

In November 2017, the Boeing 737-800 collided with the drone while landing at Buenos Aires Airport.