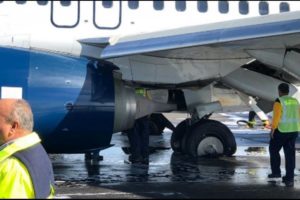 Aeromexico Boeing 737-800, performing flight AM120 from Mexico City to Guadalajara, suffered a rupture of the main landing gear during landing. The aircraft with 151 passengers and crew on board landed on runway 28, but after the damage of the main landing gear proceeded to stop at runway 02. Also according to unofficial information, there was a fire in the tires. The emergency and safety services were dispatched at the scene of the accident and applied foam to the landing gear.

All the passengers were disembarked safely on the runway and bussed to the terminal. No injuries were reported.

“The 151 passengers on board and the crew have been disembarked and are well”, says the official statement of Aeromexico.

The airport of Guadalajara was closed for more than one hour, so some flights had been redirected to other terminals, such as from Puerto Vallarta, Leon and Aguascalientes.

The Boeing 737 is a short- to medium-range twinjet narrow-body airliner.
The Boeing 737-800 is part of Boeing New Generation and a stretched version of the 737-700. The 737-800 seats 162 passengers in a two-class layout or 189 passengers in a one-class layout. Boeing 737-800 is the most common variant of the Boeing New Generation, which has had over 4,800 delivered as of 2018 and is the most widely used narrowbody aircraft.