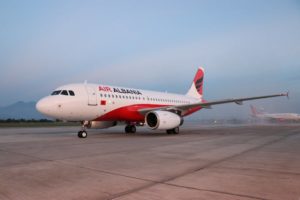 Albanian national airline Air Albania, which was founded in partnership with the Turkish company Turkish Enterprise, made its first flight on the route Tirana – Istanbul. The first passengers to fly from Mother Teresa International Airport in the Albanian capital to the Turkish city are 80 local students.

Edi Rama was pleased with the fact that some of the best students left for the first flight to Istanbul.

“This is a symbolic flight. We will have other ones this month”, said Albanian Prime Minister.

The newly created airline was solemnly opened at a ceremony in Tirana on Friday night. Air Albania will carry both passenger and cargo flights.

The first flights of the airline will connect Tirana and Istanbul, but later Albanian planes will fly to European capitals: primarily to Rome, London and Milan.

In June 2018, the government of Albania initiated the creation of the joint stock company Air Albania. The organization “Albcontrol” representing the state owns 10% of the company’s shares, the main shareholders are Turkish Airlines and the Albanian company “MDN Investment”, which own 49% and 41% of the shares, respectively.