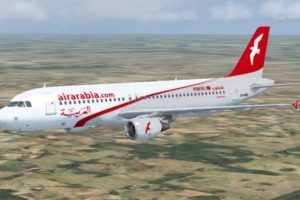 Air Arabia plane Airbus A320-200 impacted with bird during approach to runway 23 at Coimbatore Airport in India. The aircraft with 106 people on board was flying from Sharjah (UAE) to Coimbatore (India), but during the approach for landing stuck with peacock, which penetrated the airplane;s left hand wing root fairing. However, the pilot succeeded to land the plane safely without reporting injuries among the passengers and crew.

After landing the safety inspectors made survey of the aircraft and was ordered to enter for repairs. Despite the minimal damage, the return flight to Sharjah was delayed for 16 hours – spare parts necessary for repair had to be delivered from another city, Bangalore.

Fortunately during the accident there were no reported injuries. The investigation for the root cause of the bird strike is under way.

Airbus A320 is short- to medium-range, narrow-body, commercial passenger twin-engine jet airliner. The final assembly of the family takes place in Toulouse, France, and Hamburg, Germany. A plant in Tianjin, China, has also been producing aircraft for Chinese airlines since 2009.