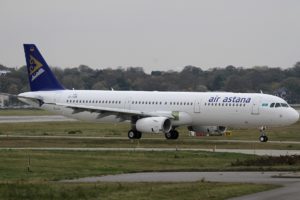 Air Astana aircraft Airbus A321, which operated a flight on the route Almaty-Aktau (in the west Kazakhstan), was forced to return to the airport of departure because of bird strike.

“The aircraft of Air Astana Airbus A321, which performed the flight 888 on the route Almaty-Aktau, collided with the bird during take-off, after the plane left Almaty at 22:25 local time. The pilot and crew decided on the return of the airliner to the airport of departure. In 23:40 local time the plane landed safely at the airport of Almaty”, said the official statement of Air Astana.

After landing, the engineers of the airline conducted an inspection of the aircraft, according to the results of which it was found that during the incident there were no damages reported. After that, the plane flew to Aktau at 00.55 on Monday.

According to the airline, collisions with birds are a serious threat to flight safety. Since the beginning of 2017, seven cases of collision of aircraft with birds have been registered at the airport of Almaty, one aircraft has been damaged: dents formed in the nose and on the right slat of the aircraft.

Airbus A321 is a member of the Airbus A320 family of short- to medium-range, narrow-body, commercial passenger twin-engine jet airliners. It was the first derivative of the baseline Airbus A320 aircraft, and carries up to 236 passengers with a maximum range of 3,200 nmi.