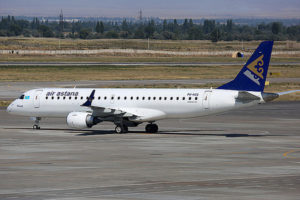 Air Astana Embraer 190 made an emergency landing at the airport of the Portuguese city of Beja. There were no passengers on board of the aircraft, which landed at the nearest airport according to safety procedures.

“On November 11, the aircraft of the Air Astana Embraer 190 performed a KC1388 flight from the aviation and technical center of Portugal to Kazakhstan. During the flight, technical problems arose, due to which the crew decided to land at the nearest airport according to safety procedures. At 21:26 according to Astana time (18:26 Moscow time), the airliner landed safely at the military airport of the city of Beja”, says the statement of Air Astana.

There were no passengers on board the aircraft, as he was returning from maintenance.

“Additional technical checks will be carried out on the airliner, after which it will return to Kazakhstan. An investigation into the fact of a forced landing will also be conducted”, says the statement of Air Astana.

The Embraer E-Jet family is a series of narrow-body short- to medium-range twin-engine jet airliners, carrying 66 to 124 passengers commercially.