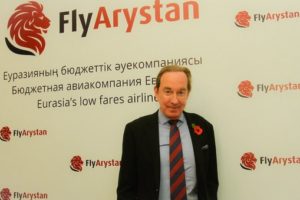 The flag carrier of the Republic of Kazakhstan Air Astana launched the new low-cost airline FlyArystan in the first half of 2019. According to the carrier, FlyArystan will operate four Airbus A320 airplanes (with a configuration of 180 economy class seats) and carry out flights in domestic directions. By 2022, the fleet will increase to 15 aircraft. It is also expected to expand the route network in the directions to the neighboring countries.

Information on the route network will be provided in the coming months, according to FlyArystan.

FlyArystan’s management team is formed from a number of local senior managers of Air Astana, which the carrier has developed over the past 16 years. The The team will be led by Tim Jordan, a British-Australian national with more than 15 years’ senior LCC management experience at Cebu Pacific and Virgin Blue.

“FlyArystan is the result of much serious thought and internal business planning, and comes as a result of a rapidly changing local and regional airline business environment”, said the President and CEO of Air Astana, Peter Foster. “It will be good for the mid to long-term prospects of Air Astana, and we hope, very welcome to the Kazakhstan travelling public, who will be able to benefit from significantly cheaper airfares on domestic and regional routes”

The budget airline FlyArystan will operate as a subsidiary of Air Astana in accordance with high standards of safety and reliability. Like Air Astana, the new company will operate on a self-financing basis. FlyArystan will not attract shareholders’ investments, government subsidies or any external financial support.