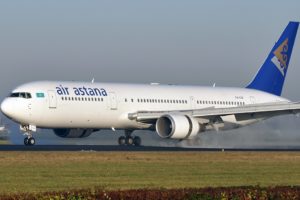 Air Astana recorded an increase in passenger traffic by 12% and revenue by 22% in 2017 after a decline in 2015 and 2016. The airline carried 4.2 million passengers in 2017, while the growth of cargo transportation amounted to almost 30%. The capacity increased by 7% due to new flights from Astana to Delhi and Kiev, as well as additional frequencies to London, Beijing, Seoul, Moscow, St Petersburg, Yekaterinburg, Novosibirsk, Omsk, Tbilisi, Tashkent, Istanbul, Bangkok, Dubai and Urumqi.

“The increased transit passenger traffic through the new terminal at Nursultan Nazarbayev International Airport became the main drivers of growth. The Astana EXPO-2017 exhibition was a great success and significantly exceeded expectations on the number of visitors. The transit flow grew by 58% and now is 12% of the total passenger flow, “said the President of Air Astana, Peter Foster.

Although this year further growth is expected, the aviation sector in most regions operates at peak or near peak capacity. The cost of fuel, personnel, airport and other consumer fees are under pressure. The cost control while maintaining quality standards will be the main challenge in the coming period, noted the head of the Kazakhstan’s airline.

Air Astana is the principal airline and the flag carrier of the Republic of Kazakhstan, based in Almaty, Kazakhstan. It operates scheduled domestic and international services on 64 routes from its main hub, Almaty International Airport, and from its secondary hub, Astana International Airport. It is a joint venture between Kazakhstan’s sovereign wealth fund Samruk-Kazyna (51%) and BAE Systems PLC (49%). It was incorporated in October 2001 and started commercial flights on 15 May 2002.

Newer PostTwo casualties after Cessna F150L crashed near Arbizzano, Italy
Older PostChina started construction of new terminals at the airport in the Maldives