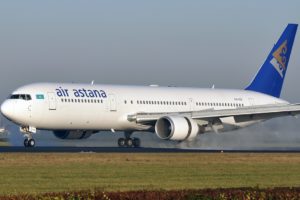 The critical situation with the supply of fuel from Russia jeopardizes regular air traffic in Kazakhstan, according to the official statement of the national airline Air Astana.

“Due to the termination of deliveries of aviation kerosene from Russia and the forthcoming suspension of the Shymkent oil refinery, regular air traffic in Kazakhstan is in jeopardy”, said the airline in statement. According to the company, the situation with jet fuel was exacerbated in 2017. “The main exporting companies of aviation kerosene in Kazakhstan are Gazpromneft, NK Rosneft, Lukoil and Tatneft, which aggregate average monthly export volume in 2017 decreased to 15,000 tons compared to 44,000 tons in 2016. Moreover, in October, these companies did not confirm the supply due to high demand of the Russian market”, added Air Astana.

Gazpromneft notified the resumption of fuel exports not earlier than May 2018.

According to Air Astana, the jet fuel needed for civil aviation in 2017 is 800,000 tons, of which 241,000 tons are produced by the Shymkent oil refinery, which stops its production for repair and preventive works in the autumn of this year.

“Over the years, Kazakhstan’s civil aviation entities are 70% dependent on Russian supplies, which were non-cyclical and non-guaranteed. The policy of Russian resource holders is aimed at selling aviation fuel according to the residual principle”, said also Air Astana, adding that the import of alternative jet fuel does not appear possible in the short term.

The Ministry of Energy of Kazakhstan is trying to resolve the crisis, including through negotiations with the Russian Federation, but, according to the company, these anti-crisis measures are temporary.

Air Astana also noted that the permitted limit for storing aviation fuel allows planning the refueling of aircraft only for 10 days.

Air Astana is the principal airline and the flag carrier of the Republic of Kazakhstan, based in Almaty, Kazakhstan. It operates scheduled domestic and international services on 64 routes from its main hub, Almaty International Airport, and from its secondary hub, Astana International Airport. It is a joint venture of the national state welfare fund Samruk-Kazyna (51%) and the British company BAE Systems (49%).