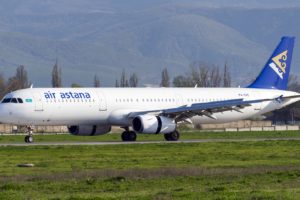 Air Astana Airbus A321 made an emergency landing at the airport in Minsk due to a technical problem. The aircraft was performing flight KC903 from Atyrau (Kazakhstan) to Amsterdam (Netherlands), but shortly after takeoff, the crew received notification for a technical problem and following the safety procedures decided to divert to Minsk. Air Astana Airbus A321 landed safely in normal mode, without causing any injuries among the passengers. All the people were disembarked at the terminal and rebooked for other flights to Amsterdam.

“The plane Airbus A321, which was performing the KC903 flight on the Atyrau-Amsterdam route, made an emergency landing at the airport in Minsk at 11:31 Almaty time”, says the message of Air Astana. “Flight KC903 is canceled”, adds the statement.

The emergency landing of the Air Astana aircraft was confirmed by the press service of the Minsk National Airport.

“The plane of the Kazakhstani airline Air Astana made an emergency landing in Minsk. The reasons for landing should be clarified directly with the air carrier”, said the press service of Minsk National Airport.

The aircraft is under inspection in Minsk. The return flight KC904 from Amsterdam to Atyrau was also canceled.