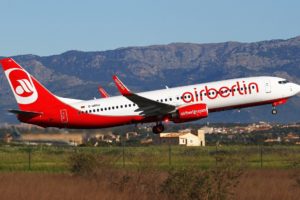 The bankrupt German airline Air Berlin has chosen air carriers Lufthansa and EasyJet as preferred bidders for the bulk of its assets. The Creditors Committee of Air Berlin will continue negotiations with Lufthansa and EasyJet until October 12 with a view to selling the company’s transport assets. In parallel, negotiations will continue with participants wishing to purchase other types of property of the bankrupted German airline.

The Collapse of Air Berlin will be inevitable, if neither Lufthansa nor EasyJet has applied for the company as a whole.

In August, the German authorities and independent bodies fighting against unfair competition in the air transportation industry, protested against Lufthansa’s intention to acquire part of Air Berlin’s assets, as on many routes the both companies were direct competitors. Lufthansa already controls 34% of the air transportation market in Germany.

It is planned that some information on the progress of the sale of Air Berlin will be made public on Monday, September 25, after the meeting of the company’s supervisory board.

Lufthansa intends to employ 3,000 of more than 8,000 employees of Air Berlin. This factor can play a big role in the process of negotiating a deal with the authorities, since German bankruptcy law includes it in the number of decisive criteria.

As reported, the procedure for the bankruptcy of Air Berlin was announced on August 15 after its main shareholder Etihad Airways said that it would cease further financing of the German air carrier. Air Berlin has been trying for several years to solve its financial problems by cutting staff and aircraft fleet. As a result of 2016, its loss increased to 781.9 million EUR compared with 446.6 million EUR in the previous year, while revenue, on the contrary, fell to 3.785 billion EUR from 4.082 billion EUR.

Air Berlin, which began flights in April 1979, ranked second among German airlines after Lufthansa, flying to 135 destinations around the world. In 2016, the company carried about 29.9 million passengers.