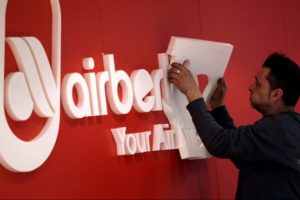 The federal government will support the company with a bridge loan of 150 million EUR.

“Without the bridge load, the return of passengers to Germany by Air Berlin flights would not be possible”, said the general press release from the Ministry of Economy and Transport. The loan is backed by a federal guarantee.

Meanwhile, Lufthansa has stated that it maintains joint efforts with the federal government to restructure the airline.

“This will ensure, among other things, that the Air Berlin aircraft, which are currently flying by Eurowings and Austrian Airlines (Lufthansa subsidiaries) will continue to operate as at present”, said Lufthansa in official statement earlier. The negotiations to acquire parts of the Air Berlin group also offered an opportunity to redirect staff. “Lufthansa intends to bring these negotiations to quick and positive results”, adds the German air carrier.

The the pilots trade union Vereinigung Cockpit (VC) announced that ”
“For Air Berlin’s employees, who are doing a great job of creating the airline, the news is a real shock”, said the pilots trade union Vereinigung Cockpit (VC). “Etihad releases Air Berlin as a hot potato, although new investors have shown interest. Gulf investors show their true face”, criticized the actions of the Arab investor VC.

Air Berlin operates flights from Tegel Airport in Berlin and from Dusseldorf. Its fleet consists of about 120 aircraft. Last Autumn, the company announced plans to cut down to 1,200 employees and lease part of the fleet due to significant financial losses. By the end of September 2016, the debts of the company were about 1 billion EUR. Around 40 aircraft were leased to the competitive Lufthansa. According to the company’s data, last year it carried 28.9 million passengers.

For years, Air Berlin has been losing. In 2016 it loss amounted to to 780 million EUR. The situation worsened at the end of March with the changeover to the summer schedule. After that, “cancellations” of flights and delays occurred.