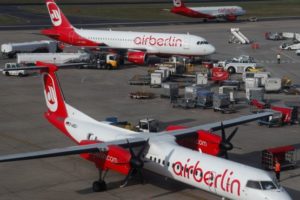 The bankrupted German airline Air Berlin stops long-haul flights, to cut its costs while looking for investors. The log-haul flights to destinations like Mexico, Cuba, the Dominican Republic and the Antilles will be stopped from September 25, the airline announced.

Air Berlin, the second-largest German airline, was forced to declare bankruptcy last month as its main shareholder, Etihad Airways, stopped its funding after several years of loss. The planes are still flying thanks to a government-granted bridge loan of 150 million EUR, which will keep operations of the airline until mid-November.

Now investors are queuing for Air Berlin, wanting to buy its assets. The German largest airline Lufthansa is the leader in interested parties in buying assets of Air Berlin. German aviation investor Hans Rudolf Woehrl announced yesterday that he has applied for the airline tender. Air Berlin confirmed today that it has received a letter from Woerl and currently analyzing it.

Participants in the tender for airline assets must submit their bids until September 15, while the decision being expected by September 21, three days before the German parliamentary elections.