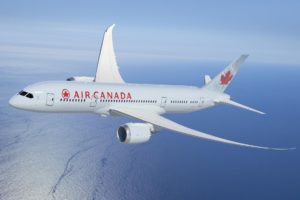 Air Canada’s plane Boeing 787-800 emergency landed in Vancouver airport due to smell of burned rubber in the cabin. The aircraft took off from Calgary airport en route to Tokyo Narita with 119 people on board, but during climbing the unnecessary odor appeared. The crew consulted with dispatch to checked for a burst tyre at Calgary Airport, but no debris were found on the runway. However, the crew decided to divert to Vancouver where landed for inspection.

It was estimated that the burned rubber smell comes from the cargo compartment, where were stowed new tyres. The cargo was offloaded and the aircraft returned in service and continued the flight to Japan.

The inspection did not showed any deficiencies and problems of Air Canada’s plane Boeing 787-800. The aircraft reached Tokyo with a delay of about 6 hours. There were no reported injuries among the passengers and the crew.

Boeing 787 Dreamliner is an American long-haul, mid-size widebody, twin-engine jet airliner. Its variants seat 242 to 335 passengers in typical three-class seating configurations. It is the first airliner with the use of composite materials as the primary material in the construction of its airframe.