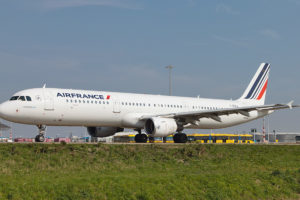 Air France Airbus A321 made an emergency landing at Paris Orly Airport minutes after take-off due to fire in one of the engines. The aircraft, performing flight AF6252 from Paris to Bordeaux, was climbing shortly after take off from the airport, when crew received notification for fire in engine. The pilot detected the problematic engine and switched it off. The airport dispatcher allowed landing and the aircraft Airbus A321 safely returned to the terminal. There were no reported injuries among the passengers and crew.

“The Airbus A321-212, performing flight AF6252 from Paris to Bordeaux, experienced a technical problem on an engine”, said the official statement of Air France. “Landing was normal”, adds the statement.

All the people were disembarked from the aircraft and were transported to the terminal. The passengers were transferred to another replacement plane of Air France and arrived in Bordeaux with delay.

The local authorities and aviation safety inspectors initiated investigation for the root cause of the accident.