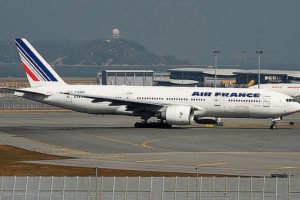 The Air France passenger airliner with 323 passengers on board passed very close to the site of North Korean intercontinental missile fell in Sea of Japan. Several minutes divided the aircraft from collision with the missile, according to the data of American officials. The near miss happened on July 4th, when the DPRK tested a intercontinental missile, which fell in Sea of Japan. The Air France Boeing 777, which was performing flight 293 from Tokyo to Paris, passed on 100 kilometers north of the site, where the North Korean missile dropped.

“The missile test area does not in any way cross the flight path and did not caused accident”, released Air France. “In addition, in cooperation with the authorities, Air France constantly analyzes potentially dangerous flight zones and accordingly adapts flight plans”, adds the statement of the air carrier.

According to the US authorities the DPRK missile then flew through the airspace that is used by commercial airliners, which caused concerns for the safety of civil aviation.

On July 4, North Korea announced a successful test of the intercontinental ballistic missile Hwaseong-14. The height of the flight along the trajectory is estimated at 2,802 km, the flight range is 933 km. The South Korean military believes that if the missile were launched along an ordinary trajectory, it would cover a distance of 8,000 kilometers. This means that when launched from the North Korean port of Wonsan, it can hit targets in Alaska and in Seattle.

The DPRK announced on July 29 about the second successful launch of the Hwaseon-14 missile. According to the investogation the missile flew 47 minutes and 12 seconds, the range of its flight was 998 km, the maximum height – 3724.9 km.