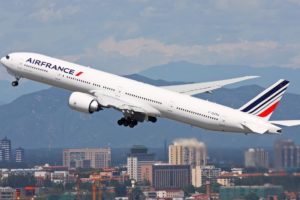 Air France Boeing 777 made an emergency landing at the airport in Paraguay after fuel leak. The airplane with 300 people on board was en route from Buenos Aires to Paris, but at 19.30 local time made an emergency landing at the airport “Silvio Pettirossi” in Asuncion due to a sharp smell in the cabin. the aircraft succeeded to land safely without any reported injuries. the airplane reached the terminal, where all the passengers were disembarked and transferred to another flight to Paris.

“We took all necessary measures in case of an emergency, we sent volunteer firefighters to avoid any incidents, also ambulances were on duty”, said the National Civil Aviation Administration (Dinac).

The investigation for the root cause of the accident was initiated. It was found that aircraft suffered fuel leak, which caused the smell in the cabin. Also there was immediate danger for the passengers if the pilots did not followed strictly the safety procedures and diverted to Paraguay.

Fortunately there were no injured people and no reported damages.

Boeing 777 is a family of long-range wide-body twin-engine jet airliners developed and manufactured by Boeing Commercial Airplanes. It is the world’s largest twinjet and has a typical seating capacity of 314 to 396 passengers, with a range of 5,240 to 8,555 nautical miles (9,704 to 15,844 km).