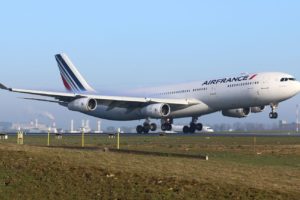 Air France plane Airbus A340, performing flight AF218 from Paris Charles de Gaulle (France) to Mumbai (India), landed by emergency in Esfahan (Iran) due to smoke and smelling fume in the cockpit. The aircraft descended normally and landed safely in Isfahan about 30 minutes later. there were no reported injuries among the passengers are crew. A replacement aircraft was sent to resume the flight to India.

The aircraft Airbus A340 remained on the ground for about 6.5 hours and is currently heading to Dubai Al Maktoum (United Arab Emirates) due to crew duty time limitation.

An interesting fact is that the airline initially reported “security reasons” as a cause for the diversion, subsequently reported a “malfunctioning ventilation circuit”. Western media even reported that the aircraft was missing from the radars due to lack of coverage by Mode-S Receivers.

Fortunately, the plane and passengers landed safely in Iran.

Airbus A340 is a long-range, four-engine, wide-body commercial passenger jet airliner that was developed and produced by the European aerospace company Airbus. The A340 was assembled in Toulouse, France. It seats up to 375 passengers. Depending on the model, it has a range of 6,700 to 9,000 nautical miles (12,400 to 16,700 km; 7,700 to 10,400 mi). Its distinguishing features are four high-bypass turbofan engines and three leg main landing gear.