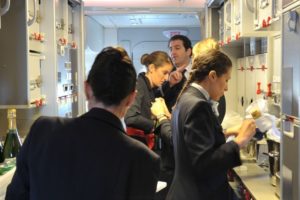 Air France flight attendants considers an indefinite strike, as the employees were required signing a contract with the management of the airline for a minimum of 5 years. The representatives of the trade union of cabin crew (CFTC), indicated that the contract for an indefinite term of employees is not satisfied, as it can be canceled by the airline management in the near future, and the signing of a new agreement will be possible only after 15 months.

The management of the national airline of France has not yet reacted to the intention of CFTC members to hold an indefinite strike. CFTC union is representing about 12% of the company’s French stewards and stewardesses.

Currently there is no additional information on weather the Air France flight attendants will happen or not.

Air France is the French flag carrier headquartered in Tremblay-en-France. It is a subsidiary of the Air France–KLM Group and a founding member of the SkyTeam global airline alliance. Air France serves 36 destinations in France and operates worldwide scheduled passenger and cargo services to 168 destinations in 93 countries (including overseas departments and territories of France) and also carried 46,803,000 passengers in 2015. The airline’s global hub is at Charles de Gaulle Airport with Orly Airport. Air France’s corporate headquarters, previously in Montparnasse, Paris, are located on the grounds of Charles de Gaulle Airport, north of Paris.