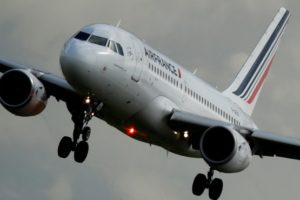 Air France-KLM Group’s share price dropped after CEO Jean-Marc Janaillac resigned last week, putting the largest European airline in crisis at a time when the strikes against the company continue and politicians warn, that its survival is under question. The Air France-KLM stock price declined by 13%, the biggest decline of nearly two years. Before today, the price had lost 40%, with the shares being the worst performing in the Bloomberg World Airlines Index.

The strikes that led to Jean-Marc Janaillac’s resignation continue this week, with about 15% of services suspended today, the airline said on its website.

Although almost all long-haul flights are expected to take place, 25% of the middle-haul flights at the Charles de Gaulle Airport in Paris will not be met. The short distance flights from Orly are also affected. The company expects the strikes to continue on Tuesday, which will bring additional problems.

Jean-Marc Janaillac said he would resign to the board of directors on May 9th. French finance minister Bruno Le Maire on Sunday said the demands of the employees were “unjustified” and insisted they show “responsibility”.

On Friday, Air France said rising fuel costs and a stronger euro would add to the increase in pressure caused by a series of attacks by employees struggling for higher wages.

Passengers can expect delays and cancellations at the last minute, Air France warned.