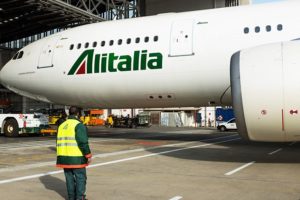 Air France-KLM has held talks with Alitalia for acquisition of the bankrupted Italian airline. The government-appointed representatives met with managers from the French company in Paris last week. Since the deadline for accepting deals are long expired, this can happen through a joint venture with easyJet.

The appearing of Air France-KLM on the scene marks a sequential reversal of the long-running saga around Alitalia’s fate. The Italian airline collapsed last year after its employees were unhappy with the terms of the deal that would allow the company to stay a little longer.

Now, under government control, the airline is trying to attract potential buyers, but so far it has apparently failed to find the right one. Among the most likely new owners are Lufthansa and Cerberus Capital Management. If Air France-KLM joins forces with easyJet, the picture will change.

In 2008, the French company already made an attempt to acquire Alitalia, but the plan was broken by the parliamentary opposition in Italy. Officially, Air France-KLM commented on the institution, leaving a loophole for a change of position – in any direction.

Most likely, Alitalia’s fate will be resolved after Italy’s parliamentary elections, which will take place on March 4th.